Margaret Wheeler learned to ski and climb at an early age in New England, and became interested in ski mountaineering while living in Europe for several seasons. As a transplant to the Northwest, she guides ski mountaineering, alpine, and rock objectives. In 2006, Margaret became the second woman in the US to complete her full UIAGM guide certification. An active member of the guiding community, she is an instructor of guide training for the American Mountain Guides Association (AMGA) and serves on its board of directors and is a former president of the organization. She is involved in avalanche education through her work as an AIARE Instructor and Trainer.

Howie Schwartz has been involved in avalanche education since 1996 and has been working to learn, teach, and develop AIARE curriculum since 1999. Howie is an AIARE Instructor Trainer, actively teaches AIARE 1, 2, & 3 courses as Course Leader and Instructor. Howie conceived of the original version of the AIARE decision making framework in 2003 and has delivered ISSW presentations on the topic of teaching decision making in avalanche terrain. He is an IFMGA/UIAGM Mountain Guide since 2001 and has guided professionally worldwide since 1997. Howie is co-owner of Sierra Mountain Guides, based in Bishop, California where he and his family reside. He serves on the Technical Committee for the American Mountain Guides Association (AMGA) and has been an Instructor/Examiner and Ski Program Coordinator designing and implementing curriculum for AMGA guide training programs since 2000. He was a founding director for the Eastern Sierra Avalanche Center and is a Professional Member of the American Avalanche Association.

Liz Riggs Meder hails from Seattle where she works variously as a curriculum designer, outdoor and environmental educator, substitute teacher and part-time mountain guide. Liz began working with AIARE as a part of a project to complete her M. Ed. in Curriculum & Instruction from the University of Washington. The project sought to increase instructional time by creating an online curriculum to complement AIARE I courses. This project has developed into the online learning program AIARE is created prior to the 2014-2015 winter season. A lover of all forms of human powered exploration of the Cascades, Liz is now honing her skills in the art of carrying an infant while exploring the mountains.

Ben Pritchett lives in Crested Butte, Colorado where he spends his summers guiding and chasing his wife and two kids around the mountains. Ben began working on AIARE curriculum development projects in 2002 and served at AIARE as the Program Director from 2005-2016. In 2016, Ben moved into a full time position with the CAIC as an Avalanche Forecaster. His background includes 6 seasons as the Education Coordinator for the Colorado Avalanche Information Center, 5 seasons forecasting for the Crested Butte Avalanche Center, ski guiding since 1998, ski patrolling for Crested Butte Mountain Resort, and 15 years working on the snow safety crew for the Elk Mountain Grand Traverse race. Ben holds an AMGA Ski Guide certification, and owns his own guide service Colorado Backcountry. He is a professional member of the American Avalanche Association and a A3 Certified Avalanche Instructor. 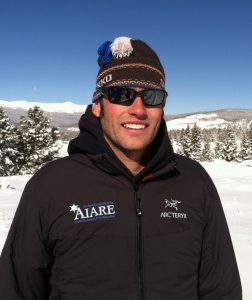 John is an AMGA certified Rock and Ski Guide based in Leadville, CO. He got his start with AIARE while living in Crested Butte, CO where he worked as an avalanche instructor, ski guide, and avalanche forecaster. He actively teaches both AIARE recreational and professional avalanche courses and is a member of the AIARE Instructor Trainer Team. John also instructs in the Avalanche Science Program at Colorado Mountain College and guides climbing and skiing throughout Colorado and the Pacific Northwest. When he’s not working, John enjoys reading, eating large breakfasts and running around the high country with his wife and their impulsive blue heeler. John has a B.A. in Geosciences from Williams College, and an M.Ed. from Colorado State University with a specialization in Adult Education and Training. 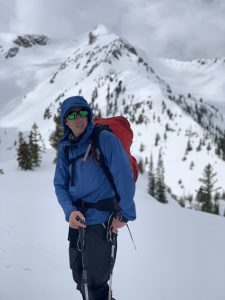 Joining the Education Committee in 2019, Sean brings 10 years of ski patrolling and mountain guiding experience, as well as time working in instructional design and workplace training programs.  His tenure as an AIARE instructor since 2012 has given him myriad  opportunities to teach and witness the developments of AIARE curriculum over the years.  Working as an administrative assistant during the A3 Pro/Rec split project from 2015-2017, he was able to better understand the unique challenges the industry and recreational backcountry users were facing in finding educational offerings tailored to their specific needs. Since the 2017 launch of the new educational streams, Sean has been an engaged board member of the A3 and serves as AIARE’s Director of Professional Programs.

Jeff works with avalanche professionals from around the world and across multiple disciplines to build avalanche education tools and train a new generation of avalanche professionals. Jeff grew up in central Washington, ski racing at Mission Ridge and riding bikes and skateboards in the ample sunshine. Trading sun for drizzle, Jeff resides near Mt. Baker where he enjoys a deep snowpack, loamy single-track, and the fall berry harvest. Jeff started snowmobiling in 2007, quickly adapting to a new mode of mountain access. He dedicates the majority of his winter to riding sleds with friends and teaching snowmobile based avalanche courses with a growing team of inspiring instructors.

After receiving his Bachelor’s Degree in Recreation at WWU in 1999, Jeff worked at Mt. Baker Ski Area, leading the Mountain Education Center and learning the avalanche trade on the Pro Patrol. He completed his AIARE Instructor training in 2012 and joined the AIARE Pro Trainer staff in 2018. He was hired in 2013 by the Northwest Avalanche Center as a Professional Observer and remains on staff as the Snowmobile Education Coordinator. Jeff is the owner/operator of a small construction company in the other season.